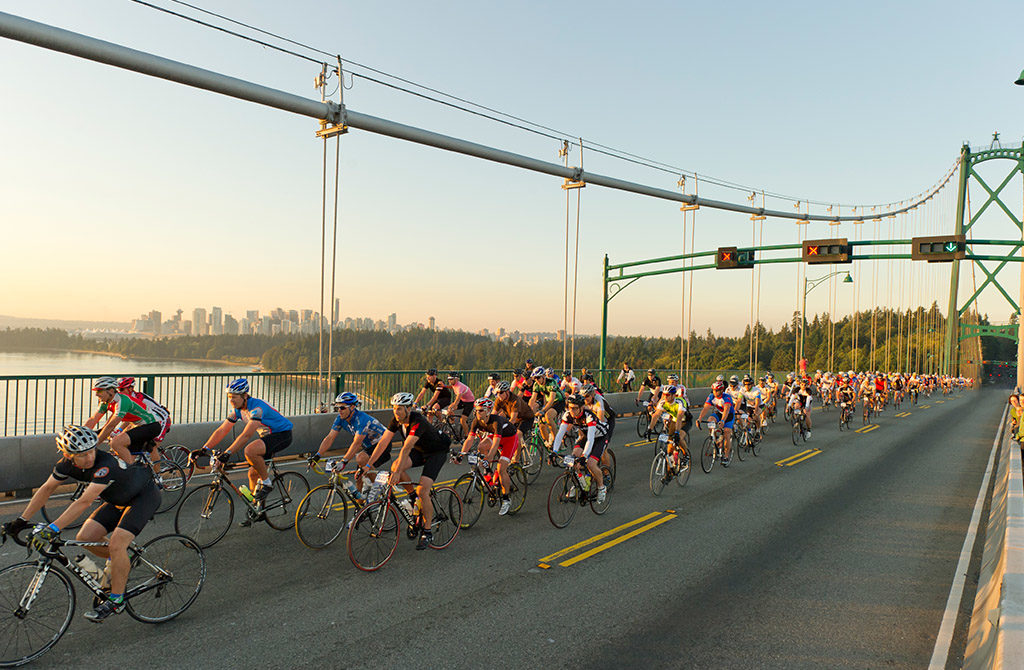 North America’s largest party-on-wheels rolls into town on September 10 and the city is pumped! Italian for ‘Big Ride’, the RBC GranFondo Whistler has been named the biggest and best Gran Fondo in North America – and for good reason. More than 5,000 riders are expected this year with a festival atmosphere that draws in thousands of supporters. Whether you’re hopping into the saddle or spectating from the sidelines, the entire course along the Sea to Sky Corridor showcases the region’s most spectacular sights. Open to all ages and abilities, this ride is about enjoying the journey. There are multiple distance options (between 55 km and 152 km), a classic bike version, and because it’s not a race, there’s no pressure!

Starting in Vancouver’s iconic Stanley Park, riders and revellers are treated to car-free roadways and bridges for one day only. Passing over the Lions Gate Bridge you’ll see boats of all sorts crossing the waterway underneath, and maybe even a seaplane passing overhead. After that, cyclists wind their way along a route that features ocean vistas on one side and the Coastal Mountain range on the other. Their final destination? Whistler – one of the world’s top resorts, and the perfect spot to celebrate a job well done and toast to a well-deserved rest.

For those who prefer an urban cycle adventure, The Burrard has you covered. Borrow one of our complimentary cruiser bikes and hit the road through the city’s integrated bike lanes. Freewheel along the sea wall to some of the city’s best spots including Granville Island, False Creek, and the beaches along Stanley Park. Early birds can take in a morning ride and pedal over to wish the Gran Fondo riders well as they begin their journey.

Ready to hit the road? Register online for the RBC GranFondo and then check out our great rates.