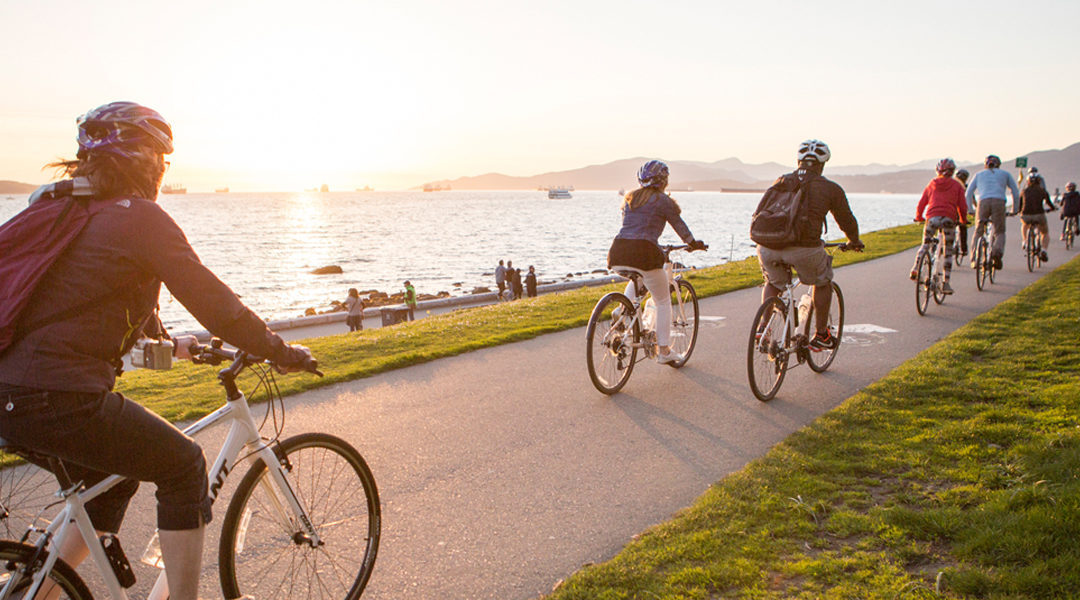 There’s no better way to experience the charming neighbourhoods and breathtaking views of Vancouver than by bike. Fortunately, the city has gone to great lengths to ensure cycling through town has never been easier or safer. And since two legs can only get you so far, if you’re staying at The Burrard, you can take advantage of our complimentary cruiser bikes to discover the city at your own speed. Choose your own adventure with one – or all – of these suggested routes for an easy day (or morning) in the saddle.

False Creek and Granville Island
No visit to Vancouver is complete without a stop at the Granville Island and getting there is half the fun! A scenic spin around False Creek will take you from the hotel along the seawall, travelling under the Cambie Street Bridge, around Science World and past Olympic Village – previously home to athletes during the 2010 Olympic Winter Games and now a waterfront living, dining, and shopping area for residents. Continue down the flat route past parks and marinas (and under the Cambie Street Bridge again!) until you hit the bustling Granville Island area. Enjoy a snack and cool drink from any number of restaurants, cafes, or food vendors before looping back over the Granville Street Bridge and stopping for a quick selfie as you approach one of the best spots to snap the city skyline.

Kitsilano
For a quick-but-pretty cycle take your cruiser bike down the road and over the Burrard Street Bridge to Kitsilano for a beachfront ride. Thanks to recent upgrades, the bridge now features a dedicated, separated bike lane to get in and out of downtown. Hang a right when you get over the bridge and pedal past a hidden neighbourhood of old homes and even older trees before finding your path along the water. Coast along the coast on a flat path that takes you along the beach and towards Kitsilano pool. Lock up your bike and have a quick dip if you choose or stop for a glass of wine or craft beer on one of the many patios in the area. For a fun return, hop on the bike-friendly Aquabus which picks up at the Maritime Museum and can bring you back to the downtown peninsula.

Stanley Park Seawall
Another must-do is a spin around the Stanley Park Seawall. This one-hour route is very easily accessed via the bike route that runs right beside the hotel! Take the bike lane down Helmcken Street and directly into the park.  Ensure you travel around the park in an anti-clockwise direction (the only direction you’re allowed to cycle this part of the seawall). Swing past the Vancouver Rowing Club to HMCS Discovery—a Canadian naval base, and past the Nine O’Clock Gun, a cannon that has gone off every day at 21:00 for for over 100 years. Further along the route you’ll see a lighthouse and ‘Girl in a Wetsuit’ – a life size bronze statue in the water just off shore. Once you slip under the towering Lions Gate Bridge, you’ll pass Siwash Rock, a place of First Nations legend and myth. As you travel beyond Siwash Rock the path begins to wind until you come upon Third and Second Beach, popular places to relax and enjoy the sun or take a dip in the Pacific Ocean. The ride concludes just a little farther ahead back at the Helmcken/Comox Street bike lane.

Gastown & Chinatown
For an entirely urban cycle, a ride into Vancouver’s Gastown and neighbouring Chinatown is a trip through the historic heart of the city. Pedal at your own pace down whichever street that moves you. Key stops include the Gastown steam clock which whistles a cheerful tune every 15 minutes and is believed to be the second steam clock ever constructed. Look carefully at the sidewalks and you may come across what looks like purple glass embedded in the cement. These were once vault lights designed to allow light to shine down into subterranean spaces. Passing into Chinatown you’ll find the Vancouver Chinatown Millennium Gate – a symbol of Eastern and Western cultures joining together. Vancouver’s Chinatown is one of the largest in North America and one of the most vibrant areas of the city. Beside the gate is the Sam Kee Building, the narrowest building on the planet! Hop off the bike and step into a whole new world at the Dr. Sun Yat Sen Classical Chinese Garden, one of the most beautiful in Vancouver.

Lions Gate Bridge and West Vancouver
For a challenging, but no less beautiful ride, head down the Helmcken Street bike lane adjacent to the hotel and swing right at Stanley Park. Take the dedicated bike lane along the Stanley Park Causeway and onto the Lions Gate Bridge. This section may look unassuming, but the slow and steady incline can be a challenge. The results are worth it when you hit the mid-span of the bridge. The view is incredible. The Burrard Inlet below is always abuzz with leisure and commercial boats while seaplanes take off overhead. You can even see the beautiful North Shore Mountains in the not-so-far off distance and if you’re lucky, you may even catch a cruise ship passing below! After the bridge’s halfway point, it’s an easy cruise to the other side where another marked lane will take you into West Vancouver and along the water to Ambleside Beach. Take a dip at the beach and have a bite to eat at the concession stand or on a patio nearby before heading back home.

Ready to book your Vancouver getaway? Check out Booking page for the best available rates!